The intensity of radiation emitted from an object is a function of its temperature, wavelength, and emissivity. A perfect emitter, also known as a blackbody, is a material that radiates 100% of the electromagnetic energy that is theoretically possible for a material at a specified temperature. Planck’s blackbody equation, developed by Max Planck in 1901, defines the intensity of radiation for a blackbody as a function of temperature and wavelength.

Each plot in Planck’s blackbody curve represents the energy distribution at a different temperature. As temperature increases, the intensity of radiation increases. Additionally, as the temperature of an object increases, the peak intensity moves to shorter wavelengths. The surface of the sun, at 6000°C, has its peak in the yellow region of the visible portion of the spectrum, and therefore, appears yellow.

We can also observe this phenomenon by slowly heating a piece of metal. At room temperature, the metal does not emit any light visible to the human eye. However, if we heat it to approximately 500°C, it begins to glow red. At 500°C, the metal emits visible light primarily in the red portion of the visible spectrum. As the temperature of the metal increases to approximately 1500°C, it begins to glow white. At 1500°C, the metal emits energy at all visible wavelengths. White light is the combination of all visible colors.

Objects that emit energy well also absorb energy well. Therefore, a perfect emitter is also a perfect absorber. The term blackbody arose because a perfect absorber absorbs all visible electromagnetic energy (light) and appears black. Blackbodies are useful as a reference to characterize the behavior of materials. The relationship between the intensity of energy emitted by a blackbody at various wavelengths as a function of temperature was discovered by Max Planck in 1900. 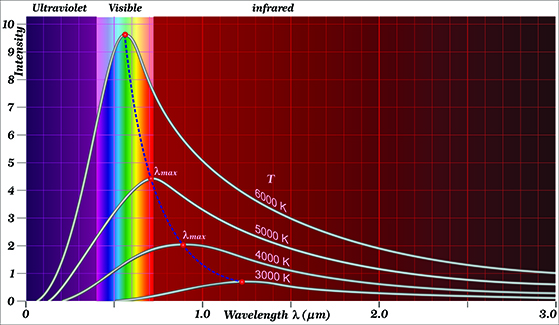 The temperature of an object and its emissivity define how much infrared energy an object will emit. The figure below shows that quartz emits less energy than a blackbody at the same temperature and therefore has an emissivity below 1.00.

Infrared energy, when incident upon matter, be it solid, liquid or gas, will exhibit the properties of absorption, reflection, and transmission to varying degrees.

Absorption is the degree to which infrared energy is absorbed by a material. Materials such as plastic, ceramic, and textiles are good absorbers. Infrared energy absorbed by real-world objects is generally retransferred to their surroundings by conduction, convection, or radiation.

Transmission is the degree to which infrared energy passes through a material. There are few materials that transmit energy efficiently in the infrared region between 7 and 14µm. Germanium is one of the few good transmitters of infrared energy and thus it is used frequently as lens material in infrared cameras.

Reflection is the degree to which infrared energy reflects off a material. Polished metals such as aluminum, gold and nickel are very good reflectors.

Conservation of energy implies that the amount of incident energy is equal to the sum of the absorbed, reflected, and transmitted energy.

Consider equation 1 for an object in a vacuum at a constant temperature. Because it is in a vacuum, there are no other sources of energy input to the object or output from the object. The absorbed energy by the object increases its thermal energy – the transmitted and reflected energy does not. In order for the temperature of the object to remain constant, the object must radiate the same amount of energy as it absorbs.

Setting the incident energy equal to 100%, the equation 3 becomes:

Because emissivity equals the efficiency with which a material radiates energy, equation 4 can be restated as follows:

Most solid objects exhibit very low transmission of infrared energy – the majority of incident energy is either absorbed or reflected. By setting transmissivity equal to zero, equation 6 can be restated as follows:

Infrared cameras detect and measure the sum of infrared energy over a range of wavelengths determined by the sensitivity of the camera’s detector. These cameras cannot discriminate energy at 7µm from energy at 14µm the way the human eye can distinguish various wavelengths of light as colors. They calculate the temperature objects by detecting and quantifying the emitted energy over the operational wavelength range of the detector. Temperature is then calculated by relating the measured energy to the temperature of a blackbody radiating an equivalent amount of energy according to Planck’s Blackbody Law.

Objects with high reflectivity can reflect energy radiated by other objects. For example, polished aluminum reflects about 90% of the energy incident upon its surface. Just as infrared cameras cannot detect the emissivity of objects in order to calculate their true temperature, they also can’t detect the reflectivity of objects. Therefore, when calculating the apparent temperature of an object, thermal imagers detect and quantify energy emitted from the object, as well as, energy reflected from the surface of the object.

Many common materials including plastics, ceramics, water, and organic materials have high emissivity. Uncoated metals may have very low emissivity. Polished stainless steel, for example, has an emissivity of approximately 0.1 and therefore emits only one tenth the amount of energy of a blackbody at the same temperature.

Note: The emissivity date in the table above are approximate values. The emissivity of a particular material depends on its specific chemical makeup and surface characteristics. Smooth, shiny surfaces, for example, tend to have higher reflectivity and thus, low emissivity.

The surface characteristics of a material determine its emissivity. To increase a material’s emissivity, it is necessary to increase the emissivity of its surface. Following are several methods of altering a material’s surface to increase its emissivity. For a given material, one or more of these approaches may be effective. Choose the method that is easiest to apply/remove and that has minimum affect on the temperature of the material. Apply coatings, treatments, liquids, tapes, or powders as thin as possible to prevent altering the thermal behavior of the original material.

Optotherm Thermalyze software has the ability to compensate for emissivity so that accurate temperature measurements can be made of materials with emissivity below 1.00. The accuracy of the measurement, however, is determined by the precision to which the emissivity value and ambient temperature are known. Additionally, the temperature of objects in the environment must be uniform. Radiance from objects that are hotter or colder than the surroundings can reflect off of the target and affect the accuracy of emissivity compensation.

During both procedures, best results are achieved when the object is heated to a temperature close to the temperature at which measurements are to be taken during testing. If performed properly, correct emissivity values can be obtained using either approach. The chosen method will depend on the characteristics of the surface and size or shape of the object.

This method should be employed when the object’s size and shape facilitates applying a small section of masking tape. Masking tape is the preferred surface treatment for object temperatures below 100°C due to its uniform emissivity (0.95) and thickness.

Alternatively, a thin dab of paint or white-out can be used on objects with small or uneven surfaces where tape cannot be applied. The disadvantages of using paint or white-out are the possibility of deviations in coating emissivity and thermal diffusion due to variations in application thickness. If care is taken during the application of the coating, however, uniform results can be obtained.

To determine an object’s emissivity using the surface treatment method, follow these steps:

This method should be employed when tape or paint cannot be applied to the surface due to an object’s small size or surface characteristics. Material heating can also be used to determine the emissivity of different materials comprising a complex object with many different surfaces.

To determine an object’s emissivity using the material heating method, follow these steps:

If used in appropriate situations and applied correctly, contact temperature probes such as thermocouples, thermistors, and RTDs can be used to accurately measure surface temperature. Small objects and thin surfaces, however, may not contain enough thermal mass to accurately measure using these devices. In these cases, contact probes can act as heat sinks and lower the temperature of the material, creating erroneous readings.

Tables of emissivity values are only approximated values for real materials. A range of emissivity values is usually given for many materials whose emissivity can be affected by surface roughness or finish. Additionally, thin sheets of material such as plastics may be semi-transparent in the infrared and therefore have reduced emissivity.

To optimize the surface temperature measurement of a material:

Note: Applicable for material temperatures from 0 to 250°C